The sacred moon of the Guru 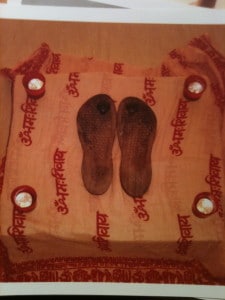 Today is Guru Purnima which is a big holiday for people who love yoga and for people who love their Guru or spiritual master. “Purnima” means total fulness and perfection, and Guru Purnima is the full moon that is dedicated to celebrating the Guru, and it’s supposed to be the most perfect of all the perfect full moons. The full moon and lunar light remind us of the slivery light of the Sahasrar, the spiritual center in the crown chakra. That moon-like light in the Sahasrar is a gentle lotion, sweet, supremely bright and soothing rather than harsh. The inner Guru is said to reside in that Light in the crown center.

What is a guru? Who is the Guru? That’s always a good question; my Guru’s answer to that was always: “The Guru is the Grace-bestowing power of God.”

This means that the Guru is the universal principle of Grace. What is Grace? it is that universally teaching, enlightening energy which is continually taking us home to the Truth. We human beings sense that we are discovering, learning, growing in wisdom, or there is no meaning in life. Grace is the force which illuminates life’s ultimate meaning. Grace is a universal force that, when we make the self-effort to ascend spiritually, reaches down to lift us up. Sometimes it just comes to us out of the Blue. Sometimes we must seek to find it.

The literature of Yoga is filled with stories of Guru-disciple relationships. You may understand the New Testament as a collection of sublime Guru-disciple stories. The Upanishads are similarly a treasury of these teaching stories. There is something about the Guru-disciple relationship that contains the teaching itself. The Bhagavad Gita is a dialogue between the Guru who is Krishna, and Arjuna, his disciple and it’s wonderful because Arjuna is kind of a simple, practical guy in his own way – he’s an athlete, a warrior, he’s not an intellectual, and so he asks the kind of questions about the path to enlightenment that Larry King would ask, really basic stuff – you’ve got to read the Bhagavad Gita to see that wonderful relationship.

We were just listening to a song by Kabir, a great Siddha, a great enlightened master, and his story of getting a Guru is very interesting. Kabir was a weaver and it seems he was raised as a Muslim, and yet he longed for mantra-initiation from a famous Hindu Guru named Ramananda. Ramananda was so great, that many extraordinary teachers and saints were his students. (This was back in the 1400s in Benares). In those days it was unthinkable for a Muslim to approach a Hindu for spiritual initiation, so what was Kabir to do? Well, he knew that Ramananda went down every morning to the Ganges to bathe, so Kabir positioned himself in the early dawn hours, crouched right down on the stair where Ramananda had to walk, (I imagine him doing child’s pose) and Ramanada stepped on Kabir’s back! And Ramananda shouted out,

Bingo! Kabir had his mantra initiation. And from then on Kabir never stopped adoring the name of God, in fact he became fully realized from his worship of the Divine name, and became a great Grace-bestowing Guru in his own right. I like this story because it shows that what is important is our own intensity of desire. Many people were surely closer physically to Ramananda than the lowly weaver Kabir, but Kabir’s longing and love was what made that Guru-disciple relationship bear such abundant fruit.

One of the most amazing stories from the Chandogya Upanishad is that of Natchiketas who has the courage to approach Death as his Guru, and Death teaches him about the deathless Self. Another story from Chandogya Upanishad: A young man named Satyakama approached a Guru, and this kid was from the lowest caste – his mother was a maid – and he didnt know who his father was. Usually you had to be a Brahmin to qualify for initiation from a Guru. So he goes to this ashram and asks for initiation and the Guru asks him, son, whats your name, who is your father? And Satyakam says, “I have no idea!” And the Guru is so pleased with his candor that he agrees to initiate him. But this is what he does: he gives Satyakama a whole bunch of sickly cows and tells him to come back for instruction when the herd has grown to a thousand healthy cows! But Satyakama doesnt blink and goes off to attend those cows and the years go by. (There seems to be something about tending and raising animals that is conducive to enlightenment). So anyway, years later when the herd has grown, off Satyakama goes to see the Guru and finally receive the teachings. And the Upanishad tells how on the way, he is spiritually instructed by various elements in nature, a bird, and so on, till when he gets to the Guru’s ashram, he is fully enlightened! So it seems that obedience to the Guru’s command does the work of liberation- you dont have to be in the physical presence of the master. It is the disciple’s sincerity, faith and intensity that does the work. And the world will teach you.

The last story, then we’ll get to our asanas. From the Mahabharata, the story of Eklavya. He was a tribal boy, but he longed for instruction from a great Guru, Dronacharya. Now Drona was teacher to the five Pandava princes, and he taught enlightenment through the art of archery. And he was teaching the princes this amazing maneuver whereby you could concentrate so precisely as to send an arrow through the teeth of a dog and shut his jaws…And a few days later they see a dog trotting by with an arrow through his teeth! And Drona asks, which one of you has accomplished this feat? But none of the princes had done it. It turns out that Eklavya had made a mud image of Dronacharya and was worshipping it continuously and with such intensity that he assimilated Drona’s teachings. This is the Tantric secret behind Guru worship: one becomes that which one contemplates.

So dont worry if you cant be physically close to your Guru, or that you dont have a Guru. Every day in my Guru’s ashram we recite a long chant called the Guru Gita, and in the first few stanzas it says: “The Guru is the conscious Self within you, this is the Truth, this is the Truth…” You definitely have a Guru, an inner master. So lets begin now and bow to the Inner Teacher of our lives, and dedicate our practice to that One.

The Glance of Shiva To the Trinity be praise!God is music, God is lifeThat nurtures every creature in its kind.Our God is the song of the angel throngAnd the splendor of secret ways,Hid from all

Yama and Nachiketa On Tues. we were talking about death, resurrection, and immortality because it comes up a lot in spiritual texts, in yogic texts and of course in the Easter story. Also, because

There’s an article in today’s Science Times about kidneys that we may find interesting from a yogic point of view. The kidneys filter impurities from the blood, impurities which are then eliminated. Yoga itself is a purgatory or purifying movement and practice. So we do yoga to purify, eliminate toxins physical, mental and even spiritual. […]

One who chants Om, which is the closest form of Brahman, approaches Brahman. This liberates one from the fear of the material world. – Rig Veda, circa 1500 BC Rare is the yogic text or scripture that does not extoll Om as a method of Self realization. You will find there that Om is sometimes […]